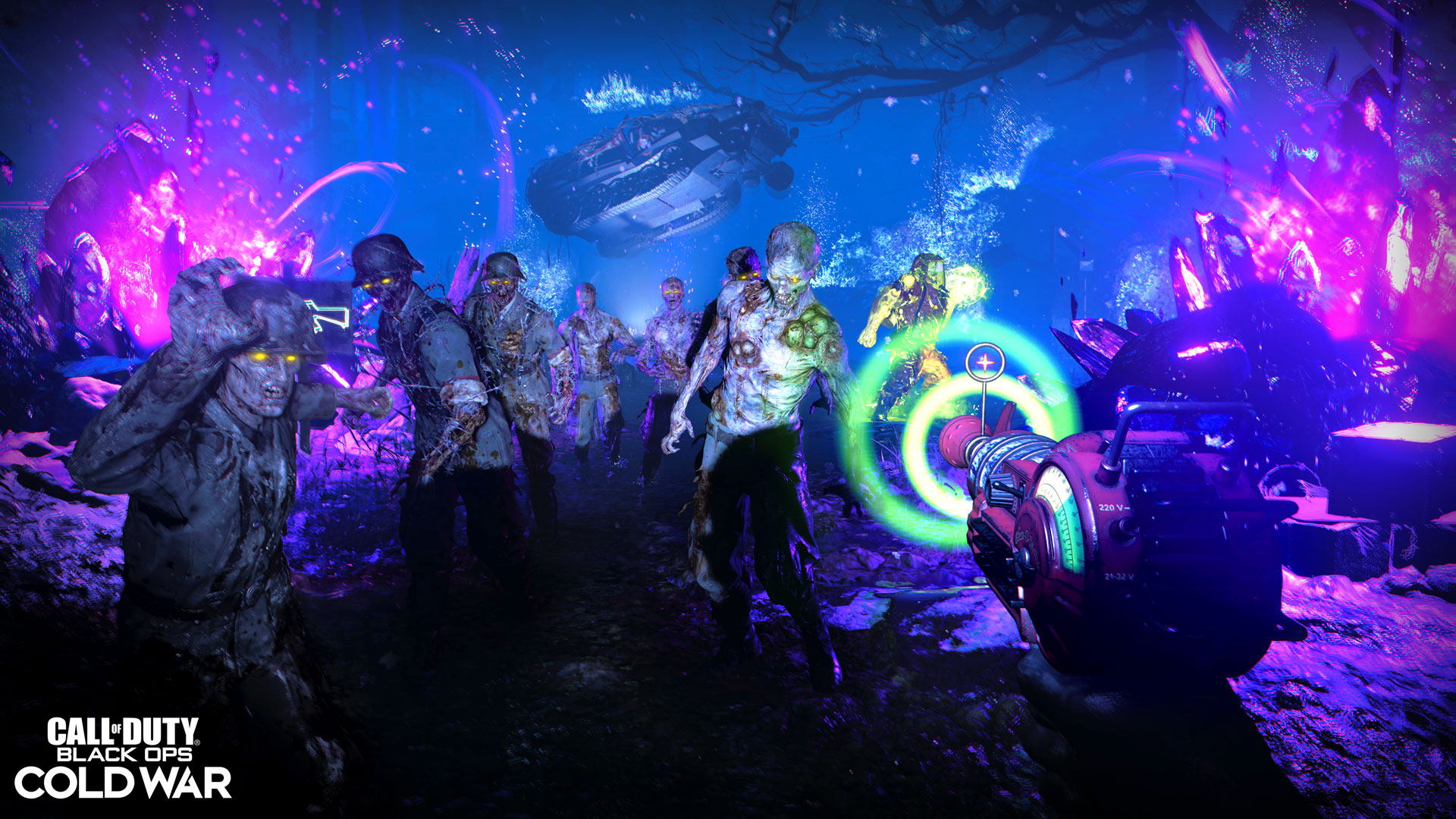 Call of Duty Cold War Zombies is by far one of the most eventful and interesting zombie modes any game has ever put out. Not only does it feature a fantastic storyline that puts you right in the middle of the action in a World War 2 research facility, but it also has a whole easter egg-based mission.

The zombie mode in Cold War is so fun to play because it has that whole theme of weird experiments gone wrong vibe with an actual character to not just the location and weaponry but characters telling stories of what happened in the form of ghosts and writings that you find all over the facility.

Getting started - Getting the D.I.E Wonder Weapon

If you have been following the Cold War Zombie mode at all, you must have come across the news that there is a wonder weapon available in the game that allows you to have four different elemental variants to it.

To begin the easter egg hunt, the first thing you have to do is get that weapon in its basic rarity form. To get the weapon, as the game starts, turn on the power and build the pack a punch machine in the dark aether.

In the following round, a radioactive zombie tank will spawn that you have to kill once, and then it splits into two smaller versions of itself. Kill those smaller radioactive zombies, too, and you will get a golden keycard.

Next step - Upgrading the Wonder Weapon - Cryo Emitter and Nova 5

Two continue with the easter egg hunt; you need to first unlock two of the four elemental upgrades for the wonder weapon, the Cryo Emitter (Freeze Ray) and the Nova 5 (Toxic Weapon). Doing these in which order doesn't matter.

To get the Cryo Emitter, go on the mezzanine of Nacht Der Untoten, knock off a box sitting on the ledge of the roof with your wonder weapon. The box will fall off and give you a flask. Next, you will have to get a radioactive zombie to shoot a tree with some mushroom growth on it, so it starts glowing.

Place the flask underneath the glowing mushrooms, and it will start to fill with a blue liquid. Head on down to the med bay, where you can melt the chains off a box sitting there in the corner giving you the Cryo Emitter upgrade. 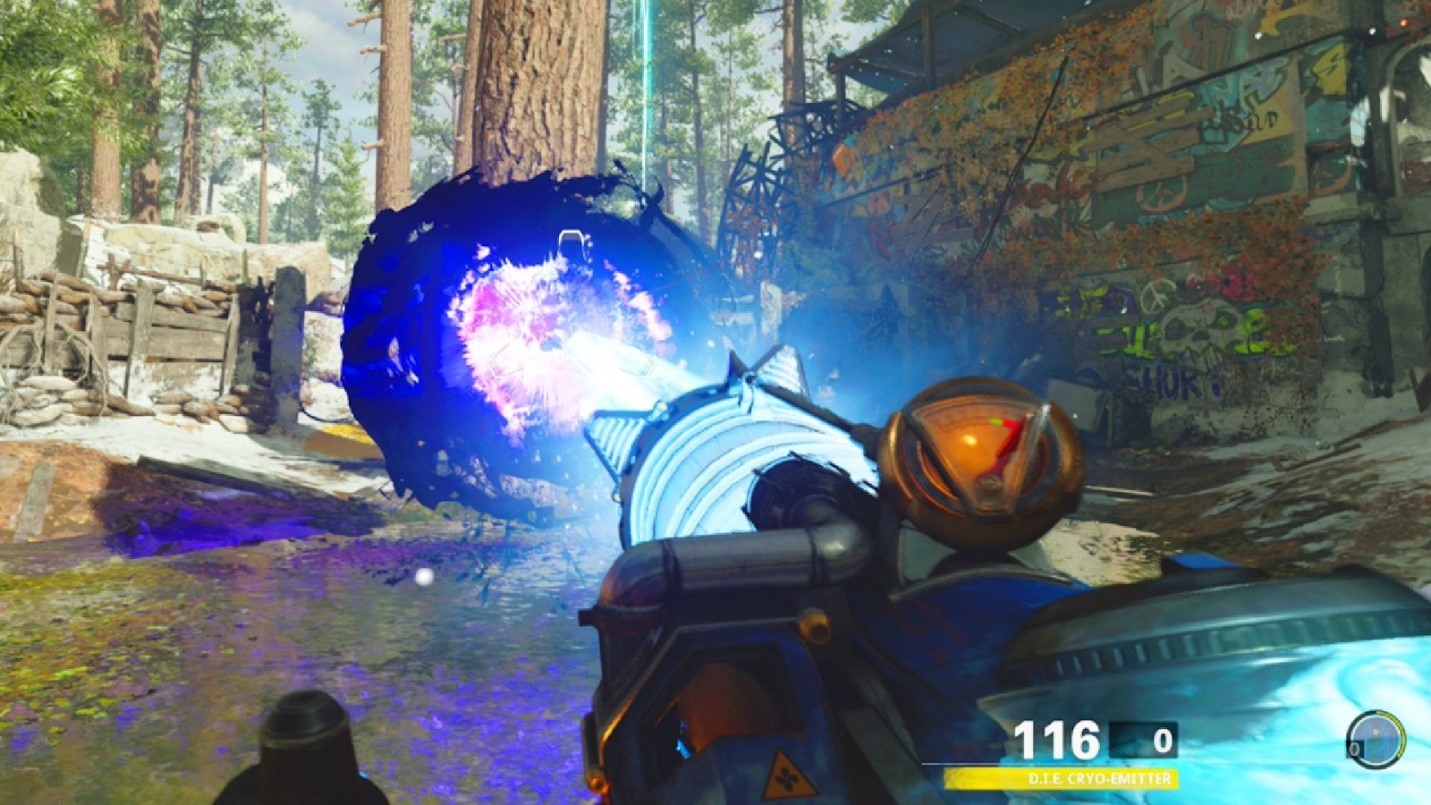 Get the base version of the D.I.E shockwave and head on over to the mezzanine again, where in an inaccessible corner of the roof, you can suck a gas container with the wonder weapon towards yourself.

Go to the weapons lab next to the Deadshot daiquiri place the can, and then kill the plague hound that spawns next to it. The container will fill with the gas from the hound. Pick it up, and then go to the crash site where you can place the gas container on top of the weapon box. Shoot it, and the vines will come off it giving you the Nova 5 upgrade.

Once you have both these weapons, you will have to enter the Dark Aether and collect three different parts for the Aetherscope. These parts spawn one at a time, so you may have to go back into Dark Aether more than once.

The locations for the three parts are the Crash Site, on top of a plane part resembling a tunnel. The second is in the Particle Accelerator next to power, and the final will be the Yard under a staircase.

Collect all three parts and head to the Particle Accelerator in the normal world, where you can use the building table to get yourself an Aetherscope.

Doctor Vogel and his Speeches

After getting the Aetherscope, kill some more zombies and then wait for another Dark Aether portal to summon. Go through the portal and head to the Medical Bay where on the second floor, above speed cola, you can collect Doctor Vogel's Diary next to a computer. 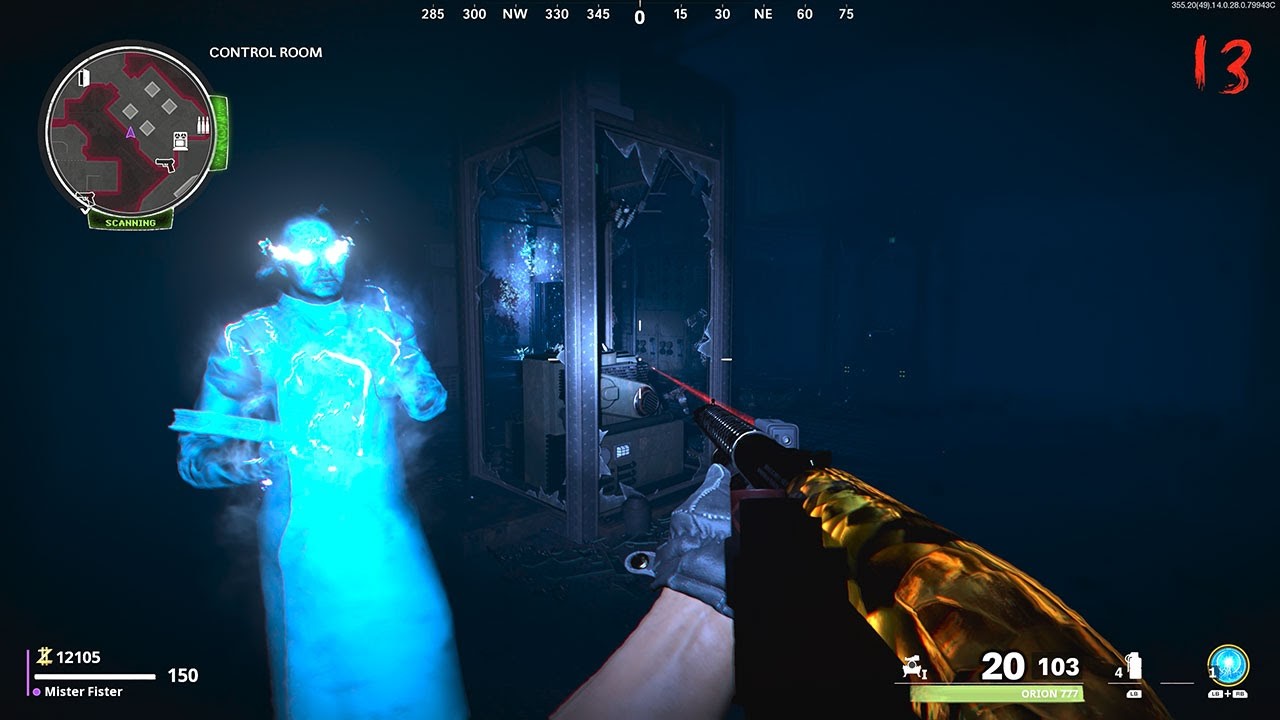 Collect the Diary and head to the lower floor of the medical bay where you can use the Aetherscope to summon the ghost of Doctor Vogel and give him his diary. He keeps talking while you have to fight a bunch of zombies. After his speech, he will disappear.

If you have been ejected, go into Dark Aether again and head to the Control Room where you can once again summon him and give him his diary. He will talk again and disappear.

The third time, while in Dark Aether, go to the place where you assembled the Aether Scope in the Particle Accelerator and summon him one final time and listen to him after giving him his diary.

This time when he's done talking, you get the diary back, and he has written the password on it. Use the password to unlock the computer next to which you initially found the diary, and you are done with this part.

Unlocking the Other Two Wonder Weapon Upgrades - Electrobolt and Thermophasic

Once the password has been entered, the other two upgrades for the wonder weapon become available. The first thing you have to do is enter the specialty portal that spawns underneath a staircase of the particle accelerator. Go through it, and you will find a glowing crystal that you can suck up using your wonder weapon.

Once charged with the crystal, go back to where you found the portal, and there will be a weapon box that you can shoot with the crystal powered wonder weapon to unlock it one time. You have to repeat this three times, and then the box will unlock for you to take the Electrobolt.

There is a specified time for which you can stay inside the special portal, after which you will be ejected into the real world. Kill some zombies for a few rounds, and the portal shall come again, and then you can repeat the steps till you open the box.

To begin this, you have to use each of the fast travel systems in the Dark Aether. Once you've done that, head on over to the crash site in the real world and shoot the box stuck under the plane's main body.

The box will open up and reveal a fuse that you cannot grab in the real world. Go to the Dark Aether portal near the pond (you need to do this through this portal and not any other) and come back to the crash site, and you can see the body of the plane has been lifted.

Grab the fuse, go to the weapons lab in the Dark Aether and go to the Deadshot Daiquiri Pit under the nuke where you can place the fuse in a laser cutter, and it will cut open a box.

Come back to the real world, go to the pond where you can find an open box in the back of a pickup truck. Open it and grab the Thermophasic upgrade.

At this point, the computer will ask for more power, and with the help of the four wonder weapon upgrades, you can proceed further. The large human-sized container attached to the roof of the Medical Bay has four knobs on it. Each of these knobs needs to be hit with a variant of the wonder weapon. You might have to check which one responds to which. 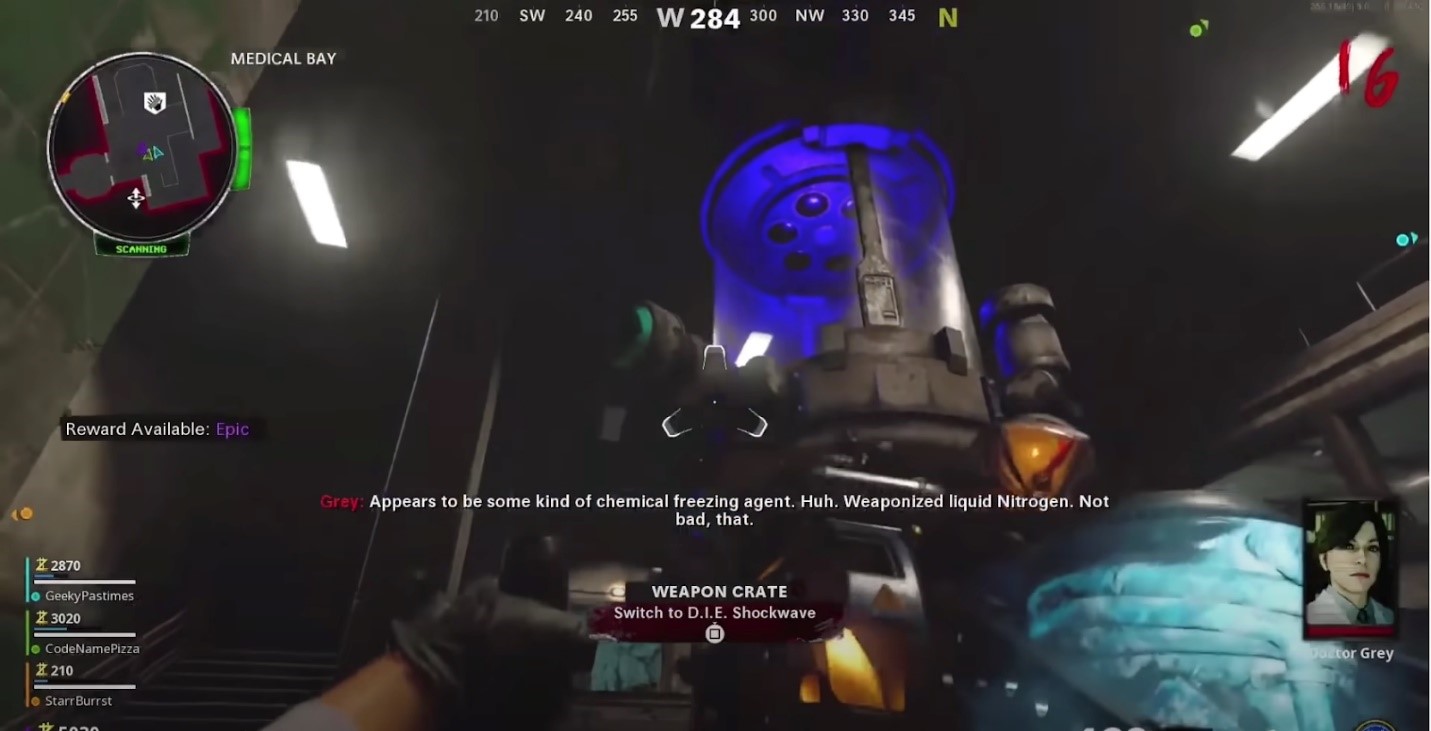 When the character is supercharged, a character quote will say, "Power restored. Proceeding with initialization." Once this is done, you will need to head back into the Dark Aether, and on the top floor next to the large container, you will see an interaction between two ghosts who talked about stealing a device.

When the conversation is completed, you get ejected back into the real world with a wrench in between you. Pick up the Dark Aether Wrench and head on over to the yard spawn where you can bang the tank with the wrench a couple of times before a zombie pops out of the hatch.

Kill the zombie and then head on over to the crafting table to craft a semtex. Come back to the tank, stick the semtex to the top of the tank lid, and let it explode. If this is done correctly, the tank will fire its cannon to a tree where the device was hidden. Head on over to the location and pick up the device. While carrying the device, you cannot fight, so make sure your teammates are protecting you, or you're just agile with your moves. 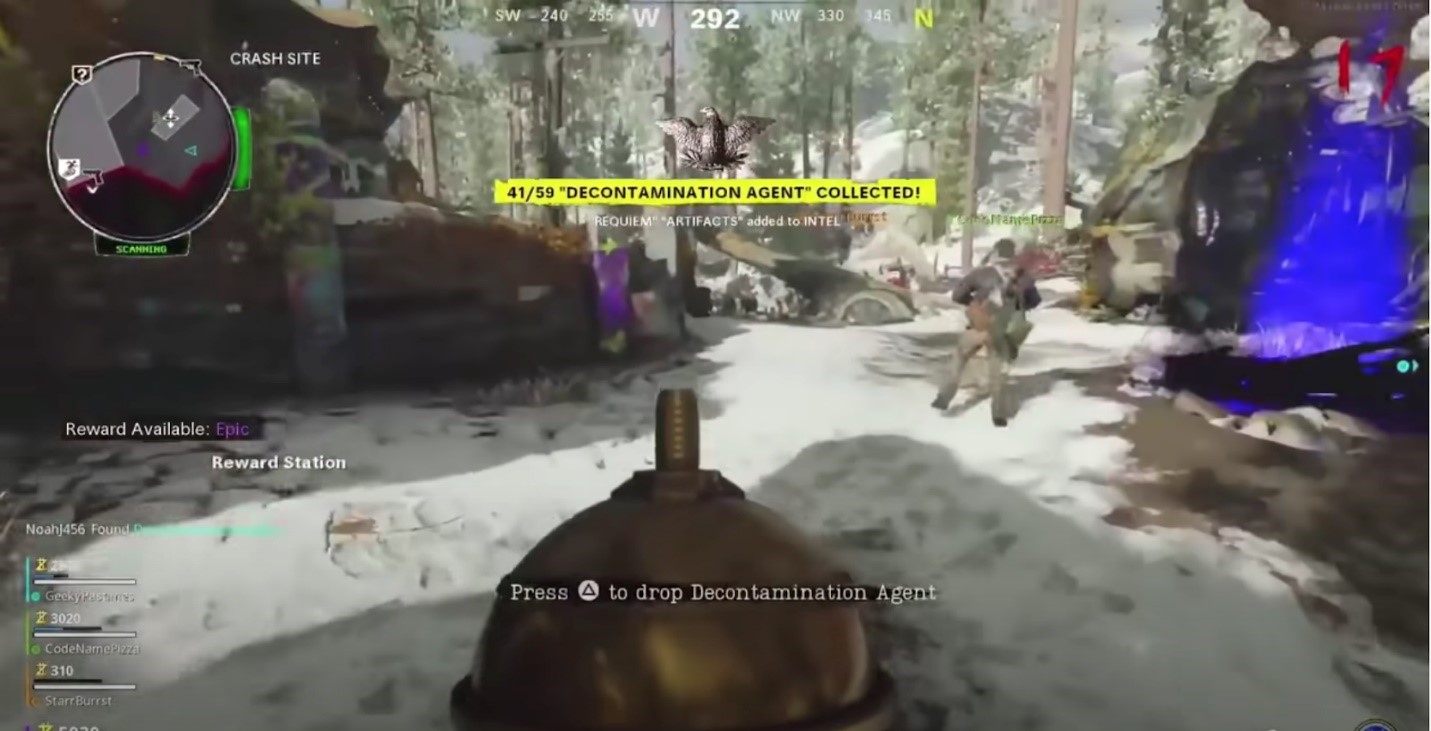 Once you kill the zombie there, the two new halves will be sucked up into the container. After which, all the players will have to head back to the computer and begin the fusion process. The zombie will reform into a nonviolent form of himself and escape the pod to the power room.

This is the final step; make sure you are ready to do this because this will be a lot tougher. Make sure you have enough ammunition and perks to fend off the hordes of zombies that are coming your way.

Head on into the Dark Aether, and there in the corner of Nacht Der Untoten, you can interact with the ghost of the zombie you just reformed. There will be a dialogue revealing more of the story of the man and D.I.E Maschine. 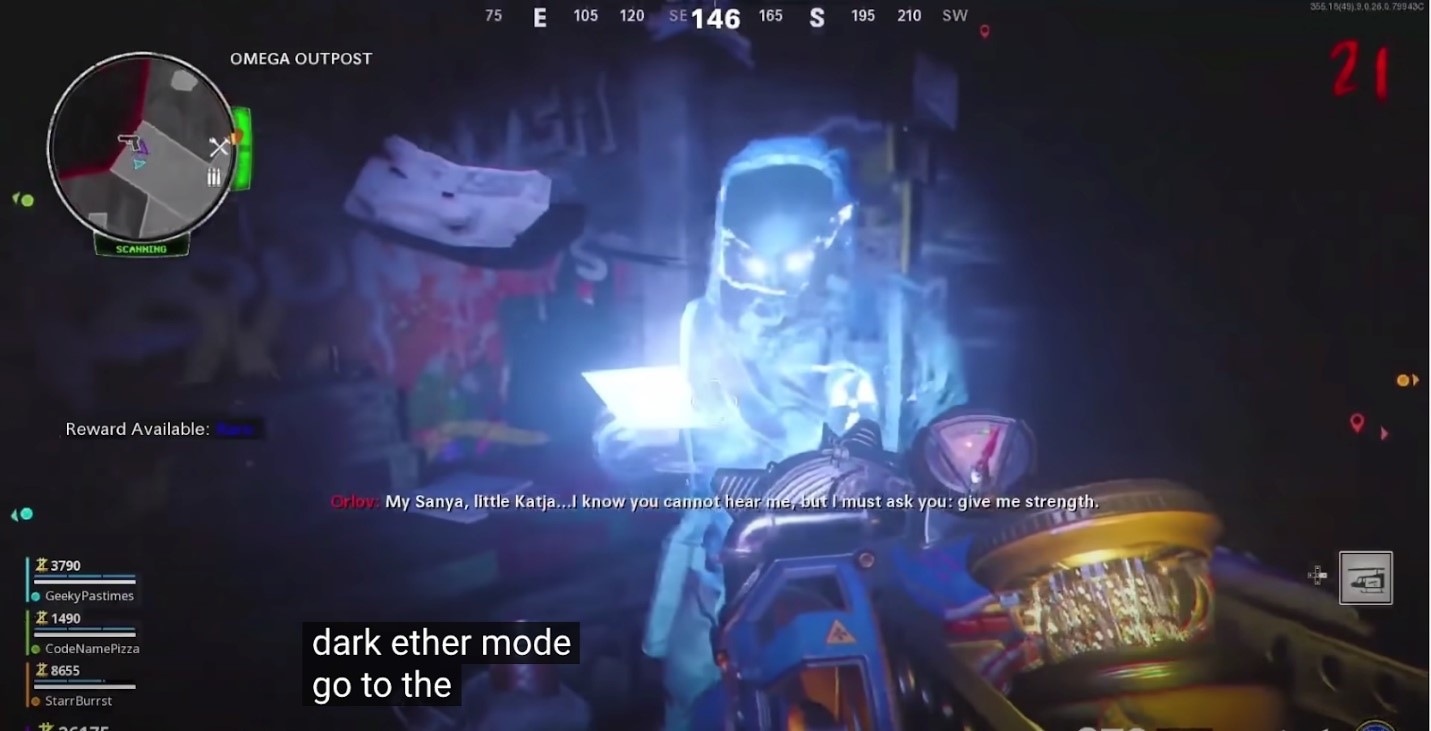 When he's done talking, you will be ejected back into the real world, and you get the option to pick up the photo that the ghost was holding. Whenever you pick up the photo, this will trigger the boss fight, so it's do or die at this point. Make sure you are prepared.

As soon as you pick up the family photograph, you will be transported to the Particle Accelerator, where the reformed human/zombie will now be an ally. The ally tells you he will be shutting down the Particle Accelerator, and while he is doing this, you have to fight an insane amount of zombies and boss zombies while protecting him and yourselves.

Since you get a lot of boss zombies, make sure the players who have wonder weapons are targeting bosses so you can pick more ammo as they die. Once the ally has done his thing, the facility will start to break apart, and you will have to escape.

Once the Accelerator starts to break apart, you have a 1 minute and 30-second window to escape to the chopper and get out of this nightmare of a place. The best way to do this is not to panic and avoid the electricity beams on your way out because they kill instantly.

Even if one of the players on your team escapes, you win the game, but it's a lot more fun to see all of your comrades escape together. Wait for the chopper to land at the pond. It will start descending once you're in the area.