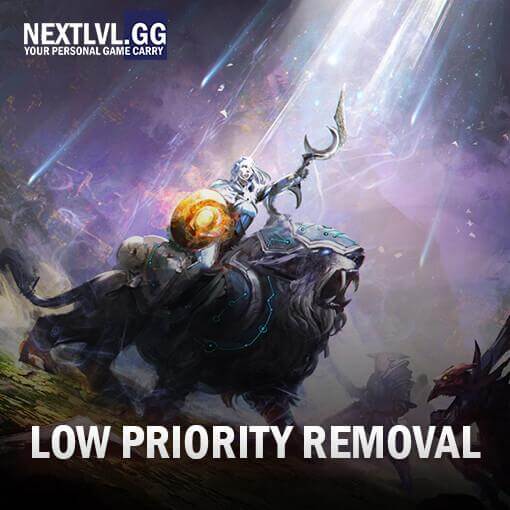 Why trust us? Learn our guarantees
1. No cheats, exploits, or bots used - a pure skill only
2. Forget about random boosters from marketplaces - only tested and verified players
3. Free stream is included for every order - you can be sure your account is safe

Got some questions? Connect our sales team
Discord - NEXTLVL.GG#2852
Or LiveChat on the website

One of our players will log in to your account and clear low priority games on your behalf. No exploits or bots are being used during the boosting process. Only real by hand LP removal.

Every player has normal priority by default. In a situation when some player failed to confirm readiness to start a match other players will get high priority until a new match is found.

However, in case a player is reported multiple times or abandons games this player might be downgraded to a low priority pool. Players in low priority have some limitations like longer queue time, can only play single draft (sd) mode, can be only matched with other low priority players and some other limitations.

In order to get out of a low priority pool player needs to win some amount of matches in sd mode. Those games are called LP games. Single draft mode allows every player to choose from 3 heroes. It can be hard to win such games as everyone tries to pick a core role and sometimes it is hard to have good team composition.

Our boosters usually play in parties and they are experienced players who are able to play on any hero. That allows us to remove low priority games in a fast and easy manner.

Is it safe to order LP removal service?

Yes it is safe. We don’t use any kind of bots or automated software to do it. Our boosters play in real matches with real players.

When can my low priority removal order be done?

We understand that every customer wants to remove dota 2 low priority games as soon as possible. On average 1 LP game takes 1 hour to be removed. Usually, we start boosting in 30-240 min after purchase.

By Aaicici
Awesome service! I wish you guys to finish everything in personal area so I can spend my bonus coins somehow LOL recommended!
Verified 02.01.2021

By
Very fast leveling service and much cheaper to other services. I will buy more for sure.
Verified 19.11.2020

By Mayday
had to wait a bit to start but boosting was fantastic!
Verified 21.11.2020

By Zek
awesome boosting service. fast boosting. I even got my battlepass boosted for free!
Verified 04.12.2020

By Quilly
It is a good way to have something done in game if you are busy and don't have time to unlock everything in game
Verified 26.12.2020

By Adam
best booster service. I was hesitant at first but the booster was a professional player and finished much faster than expected. Highly recommended!
Verified 08.11.2020